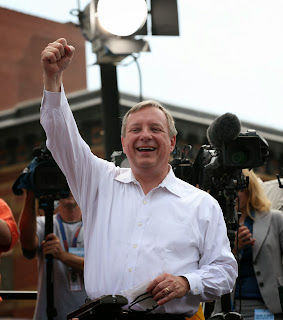 Planned Parenthood Illinois Actionâs Roe v. Wade 41st Anniversary event on January 23, 2014 is a time to celebrate our successes and collectively prepare for the road ahead of us. Join us as we honor this monumental decision and the men and women who work tirelessly to protect womenâs health and rights. Tickets can be purchased online for the event which will take place at Bottom Lounge in Chicago. This year, the Dr. Marvin Rosner Lifetime Achievement Award is being awarded to Senator Richard Durbin for his stellar record of protecting womenâs rights.

The Dr. Marvin Rosner Lifetime Achievement Award is given to individuals that have spent years fighting for womenâs health and reproductive rights. Dr. Marvin Rosner performed the first legal-on-demand abortion on February 1, 1971 while Chairman of the Department of Obstetrics and Gynecology at Grant Hospital. An Illinois law stating that abortion was prohibited within the first 90 days of pregnancy had just been overturned in federal court the previous day.

Throughout his political career, Senator Durbin has demonstrated a strong commitment to womenâs health and reproductive rights. In 2006, he voted yes on the Senateâs $100 million budget amendment to reduce teen pregnancy through education and access to contraceptives. This amendment includes funding for legislation that would create and expand teen pregnancy prevention programs and education concerning emergency contraceptives. In 2008, he fought for funding for family planning and supported coverage of contraceptives by health insurance. In 2010, Senator Durbin voted yes on Affordable Care Act, which gives women access to birth control, breast exams and other preventable healthcare at no cost.

In 2013, Senator Durbin voted yes for the Shaheen-Stabenow Amendment that would allow Congress to continue to protect safe and affordable access to womenâs healthcare. This amendment was a strong statement in support of access to basic women's health care services provided through the ACA and other federal programs like Title X and continues to play a huge role in the support of womenâs healthcare coverage, providing family planning and reducing unintended pregnancy.

posted by Planned Parenthood at 3:15 PM