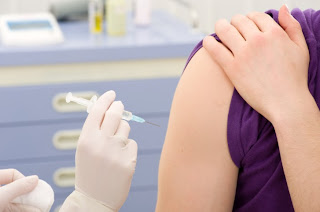 You wear sunscreen to prevent skin cancer, and abstain from smoking to avoid lung cancer.

HPV, or human papillomavirus, is responsible for 19,000 cases of cancer in women every year, and 8,000 in men. It may also cause genital warts.

For many, the infection goes away on its own and they donât even realize they were infected. For some, it can cause serious health problems, including cancer or warts.

Itâs spread through skin-to-skin contact, not just genitals, but is also one of the most preventable kinds of cancer when the right protective measures are used.

How you can prevent it

The vaccine, approved seven years ago and shown to be safe and effective, prevents against the two types of HPV infections that cause the majority of cervical cancer cases.

Itâs recommended for those ages 9-26.

The vaccine is especially effective for boys and girls who receive it before they are sexually active, but even people whoâve already had sex can speak with their health care providers about the HPV vaccine.

As of 2011, though, only about one in four Illinois girls and women have received the full three doses.

Planned Parenthood provides 34,000 HPV vaccines a year. This month is National Immunization Month, so itâs a good time to discuss your vaccine options with a health care professional.

Planned Parenthood of Illinois health centers provide HPV vaccines at locations throughout the state, and encourage women to consider getting immunized.

Other ways to protect yourself against HPV infection is to use a condom for every sex act, limit your number of sexual partners and get tested frequently.

HPV is the most common sexually transmitted infection in the United States. About 80 percent of women, and half of all men will contract some form of HPV infection by the time they are middle aged.

A vaccine for everybody

The vaccine is safe for males and females, and has been supported by Planned Parenthood, the American Cancer Society and the American Academy of Pediatrics.

Young people who receive the vaccine, which is delivered in three shots over six months, have not been shown to be more sexually active.

They do have a significantly reduced risk of contracting the virus, and potential health problems later in life.

The vaccine is a major breakthrough in cervical cancer prevention and public health, and should be considered a normal part of routine health and wellness.

Talk with your doctor or visit a Planned Parenthood of Illinois health care center this month to find out about getting the HPV vaccine.

posted by Planned Parenthood at 10:00 AM